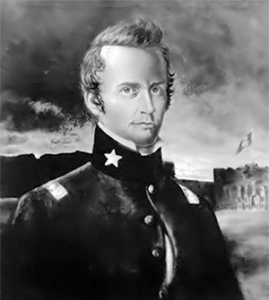 William Barret Travis was born on 9 (or possibly 1) August 1809, in Saluda, South Carolina.
Growing up in a relatively small rural community, he would have known his second cousin and fellow Alamo defender, James Bonham. On moving to Alabama with his family, Travis studied at academies in Sparta and Claiborne, eventually taking an apprenticeship with a local attorney.
By the time he married Rosanna Cato on October 26, 1828 he was  a practicing attorney. After the birth of his son he settled into the local community, joining the Masons and the Alabama Militia. However, when his wife fell pregnant again he suspected that he was not the father and fled the area following a fatal confrontation with the man he believed to be responsible.

Travis surfaced in Tejas in 1831 and moved to Anahuac, where he set up to practice as an attorney.
He was arrested and imprisoned in the guardhouse of the Mexican garrison in Anahuac, for his part in defending a slave owner, whose runaways had been captured and enslaved by the garrison commander.
Due to overwhelming support from fellow Texans, Travis was released. 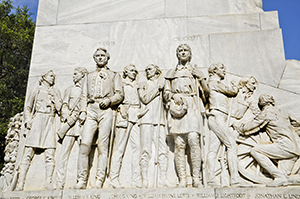 The movement for an independent Texas was gaining momentum and by 1843, Travis was running his practice from San Philipe, where once again, he was drawn into the turmoil of Texas politics, exacerbated by Santa Anna's appointment as President of Mexico and further stringent restrictions on Texans.
In 1835, Travis led a team of around two dozen men on a successful amphibious attack to capture the Anahuac garrison, commanded by Capt. Antonio Tenorio. Travis was regarded as an outlaw by the Mexican military commander, Gen. MartÌn Perfecto de Cos and if captured, he was to be arrested and stand trial. 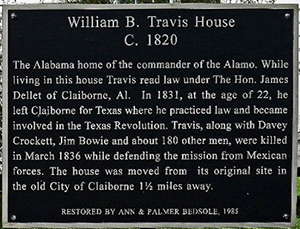 His life was embroiled in the fight for independence and by the end of the year he accepted a commission as a lieutenant colonel of cavalry, only to be sent out to recruit 100 men to join Col. James C. Neill at the Alamo.
Travis could find no more than 29 volunteers and feeling ashamed, requested other duties, only to be refused and on February, 3, he entered the fortified mission, where Jim Bowie was already instated. Within a week they were joined by Davy Crockett.
Lieutenant Colonel James C. Neill left the Alamo on February 14, due to a serious illness in his family, leaving Travis in command. However, the volunteers, refused to take orders from him and would only answer to Jim Bowie. After some hostilities, the two men agreed to share the command, with Travis in charge of the enlisted men and Bowie in charge of the rest.

Travis sent letters to Sam Houston and others, asking for help, but none came . He sent out his famous “Victory or Death” letter on February 24.

Santa Anna arrived on February 23, mounting a full attack on March 6, ending the lives of Travis and his comrades.