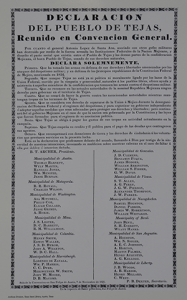 Stephen F. Austin is considered to be the founding father of Texas. He inherited a Spanish impresario grant from his father Moses, which gave him permission and financial reward for bringing settlers to the territory. However, as he was about to commence, Mexico declared independence from Spain and Austin had to negotiate with the new Mexican government. He succeeded in this and by 1825 had settled 300 families. Within a few year he added a further 900.

In the 1830's, the citizens of Tejas were largely from Europe. Some of the Spaniards stayed on after the Mexican-Spanish Revolution and many local Indians converted to Christianity and adapted to European customs.

The Texas Revolution started with the Battle of Gonzales as Mexican troops tried to retrieve a cannon, given to the town to protect itself from hostile natives. The Texans refused to return the canon and cried out "Come and take it!".
As the men of the Alamo were under siege from the army of Santa Anna, independence was declared on 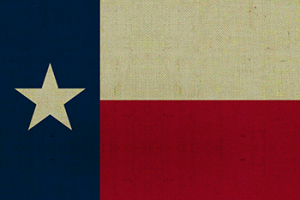 March 2, with the Constitution of the Republic of Texas. Sam Houston was appointed as military commander.

After the capture of Santa Anna at San Jacinto, the Mexican army was in disarray, giving the new independent territory of Texas, time to get organized. Houston was elected the first President of the Republic of Texas. Although annexation to the United States was one of the first goals, it did take ten years for Texas to be accepted as the 28th State of the Union.

The territory of Texas was bordered by Louisiana in the east, Mexico to the south and inhospitable territory to the north and west. The Comanche and Apache Indians were both hostile, but of the two, the Comanche were the more dangerous. Being nomadic, they had been driven south by the white settlers moving 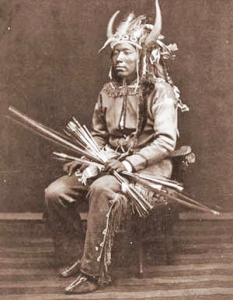 across the north. Their buffalo were decimated and in order to survive they raided the homes of settlers. They were imaginative and barbaric in their tortures. Children and young women were often kept alive for years. Some even integrated into their society.

The area was lawless and attracted men of a fearless nature, looking for adventure. Joining the Texas Rangers was one option. Samuel Colt's business might never have been established if not for the demand in Texas.

Texas attracted many American settlers from the east, offering more land and greater rewards. The Scots-Irish, a particularly tough breed, had already settled throughout the Appalachians, but many were expert riflemen and eager to exercise their skills on both Indians and Mexicans.

The first cattle to arrive in the New World were those introduced by Christopher Columbus. The Spanish added a few more and by the mid 1880's they were in great demand in the developing territories west and north. Between 1866 and 1886 around 20 million head of cattle were driven out of the Lone Star State.

The last great age for Texans occurred with the early 20th century oil boom, when many Texas oil barons became some of the richest and most influential people in America.