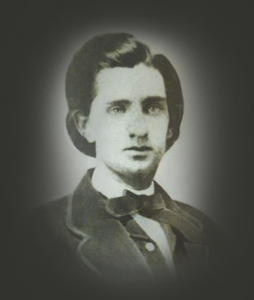 Sam Davis was born in Rutherford County, Tennessee on October 6, 1842.

Recruited by the Confederate army at the start of the Civil War, he formed part of the First Tennessee Volunteer Infantry, involved with battles at Cheat Mountain and Shenandoah Valley. He was injured at the Battle of Shiloh and received more severe injuries at Perryville. Making a full recovery, he joined the Coleman Scouts, brave men who entered enemy territory,wearing Confederate uniforms, passing messages and reporting back on the movements of the Union Army. 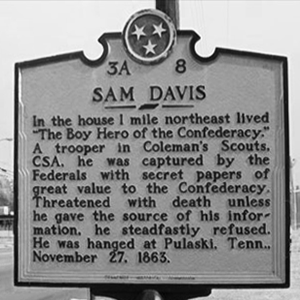 Twenty one year old Davis was captured near Minor Hill, Tennessee, while in possession of Union battle plans. He could not be treated as a prisoner of war as he would not tell where he obtained the documents and was obviously spying. He was sentenced to hanging with the provision that if he revealed his contact he would not die.
He reportedly said "I would rather die a thousand deaths than betray a friend." Hence sealing his fate.

Seven days after his capture, he was hanged in Pulaski, Tennessee, on November 27, 1863.