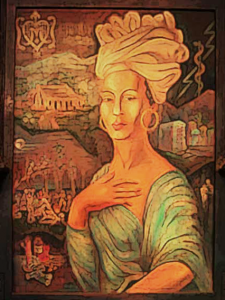 Born a free woman of color in Louisiana circa. 1801, Marie Laveau was a Catholic Creole.

She gained a reputation for her voodoo spells and potions and often invoked the Catholic Saints in her rituals.

She was a well respected voodoo and voudoun practitioner at the time of her marriage to Jacques Paris. The ceremony was a grand occasion, held on August 4, 1819 in St Louis Cathedral, New Orleans.
Jacques Paris died or disappeared mysteriously the following year, but no suspicion was directed towards Marie.

It is believed that she earned a living as a liquor importer and/or hairdresser. 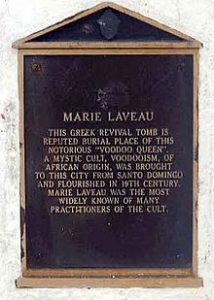 Marie cohabited with Louis Christope Dominick Duminy de Glapion and together they raised over a dozen children, one of which, was Marie Laveau II.

The seamless transition from mother to daughter merely strengthened the reputation and ensuing legend of the single name. On reaching her seventies, the mother passed the mantle to her daughter, who worked in much the same way.
Some say that she did not posses the same power as her mother but made up for it with charisma and theatricals.

A Voodoo shop in New Orleans bears her name and there are family decedents alive today, believed to be active voodoo practitioners.