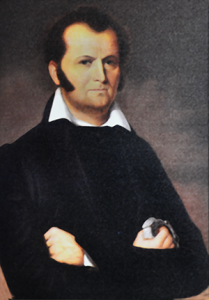 Famous mainly for a knife that he used, James Bowie was born in Kentucky in 1796 and died a hero at the Alamo, Texas on March 6th, 1836. He spent three quarters of his life in antebellum Louisiana, gaining respect as a fearless and formidable adversary and patriot.Born to English/Scottish parents, James was the second youngest of nine children, learning mainly from his older siblings. By an early age, he was not only proficient in hunting and weaponry, but could speak fluent French and Spanish.

Aged 16, he answered Andrew Jackson's call to join the militia and fight the English at New Orleans. However, the battle was over before Bowie arrived.

He joined up with the Long Expedition in 1819 and it is possible that on this trip, he first encountered the privateer Jean Lafitte on Galveston Island. On his return home, his father passed away and he inherited some land and slaves. Returning to Galveston with his older brother Rezin they purchased slaves from Jean Lafitte, which in turn, they handed to the authorities, receiving half of their auction price as a reward. for 'finding' them. A loophole in the law abolishing slave importation allowed this. They repeated this several times and in 1825, purchased the Acadia plantation near Alexandria.

In 1827, what became known as the Sandbar Fight took place near Natchez, Mississippi. It was a bloody brawl which followed a duel, where the duelists fired twice, missing one another and then shook hands. However, festering animosity between the friends of both sides caused Bowie to be shot and grounded. He raised himself up, to be knocked down again with a pistol butt. He was shot at again, then impaled in the chest with a sword cane. As the assailant placed his foot on Bowie to gain leverage when removing the cane, Bowie pulled him down and disemboweled him with his knife. Bowie stood up, with the sword protruding from his chest and was shot and stabbed yet again. His amazing recovery made news headlines and the fight left two dead.

Recovering from the fight, he made excursions into Texas and settled there in 1830, joining up with the Texas Rangers. Hearing of opportunities available to Mexican citizens with lucrative land deals he swore his allegiance to Mexico, becoming a Mexican citizen in September, 1830. He helped build wool and cotton mills and exploited a legal loophole in buying subsidized land and selling for profit. In 1931 he married a 19 year old Mexican girl, Maria Ursula de Veramendi and together, they raised two children. He gained government permission to lead a party in search of the Los Almagres Mine. His party of eleven men were attacked by up to 150 hostile Indians and fought for over 12 hours, killing and wounding 70 Indians, with the loss of only one man. Bowie returned a hero.

In the same year, he and his brothers sold the Acadia Plantation for a very large profit and in a separate incident, he and his brother John were exposed as fraudsters in a land sale where documents were forged. The victims were to sue the brothers, but the evidence mysteriously disappeared and the case was dropped. The investigation started years beforehand, possibly encouraging his move to Mexico.

The ongoing changes in Mexican politics soured the existence of Texans, and in August 1832, Bowie played an active part in the Battle of Nacogdoches. A year later Bowie was part of a delegation which formerly requested the independence of Texas within the Mexican federation.
However, when Antonio López de Santa Anna became President in 1833 he changed the Mexican constitution in many ways, literally becoming a dictator.

In 1833 Bowie sent his wife, children and in-laws to Monclova, in order to escape an outbreak of cholera. Sadly, the passage of the disease could not be predicted and his family perished. Devastated by his loss he turned to alcohol for support, until another opportunity arose in 1834 in land speculation and although Bowie was appointed a land commissioner, Santa Anna overturned the law a year later, and Bowie had to flee the area or face arrest.

The inevitable flames of the Texas Revolution were ignited with the Battle of Gonzales on October 2nd, 1835 and flared again on October 28th, at the Battle of Concepción, where Bowie, once again, emerged as a hero.

blessing to mount a defense in the Alamo but with little over 100 men based there, this would be an impossible task. Houston ordered that the fort be destroyed but Bowie decided to stay and fight. Lieutenant Colonel William B Travis was given command over Bowie but the two men accepted a shared leadership.

In early February, Davy Crockett, the Tennessee Congressman, arrived at the fort, along with 30 volunteers and outnumbered more than ten to one, the men of the Alamo fought against the Mexican army until the final battle on March 6th.
Some while before this, Bowie had been confined to bed with an unconfirmed illness, possibly tuberculosis or pneumonia, and when the Mexican soldiers stormed the Alamo, he fired at the Mexicans from his bed and was killed where he lay.

It is said that a line was drawn in the dirt and those that would stay and fight, were to stand on one side. Bowie, too ill to walk, asked to be carried over the line to be with the men who would stay behind.