The Kennedys - JFK and RFK 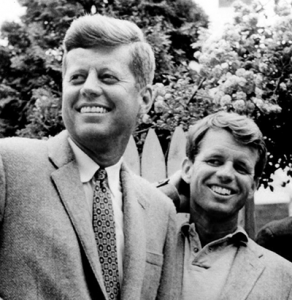 John (Jack) Fitzgerald Kennedy was born on May 27, 1913, followed by his brother Robert (Bobby) Francis Kennedy on November 20, 1925.
Their older brother Joe was killed in WWII and the youngest brother Edward followed the family trend as a politician. They also had five sisters.

John and Robert shared many things in life, their education, military service, entering the political arena and women.

It is documented that Sam Giancana owned the Cal-Neva Lodge at Lake Tahoe and the brothers would visit separately for private meetings with Marilyn Monroe and other young ladies. Frank Sinatra organized everything for the Kennedy brothers, even hosting a gala fundraising party, held at the National Armory in Washington, D.C. on January 19th, 1961, the night before JFK’s formal inauguration.

John Kennedy became president on January 20, 1961 with Lyndon B Johnson serving as his Vice 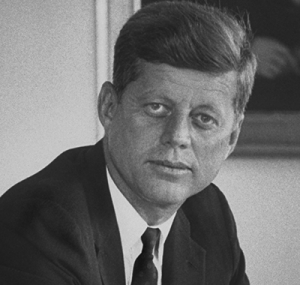 President. The two men did not get on and by 1963 Kennedy was willing to drop him from the next election campaign due to his corrupt dealings.

JFK had many enemies, the Mafia who felt betrayed by him when he started the deportation of some of the bosses, such as Carlos Marcello. Sam Giancana was involved in vote rigging on his behalf and the Mafia had millions of dollars tied up in Cuban casinos. Kennedy ignored their support in his election and was not in favor of a full military invasion of Cuba. Because of his attitude towards Cuba, the Cuban exiles felt betrayed and the CIA likewise, for they had many operatives in Cuba.
After the failed CIA-organized Bay of Pigs invasion, Kennedy fired the CIA chief, Allen Dulles,
Kennedy's comment on breaking up the CIA into a thousand pieces created even more animosity towards him 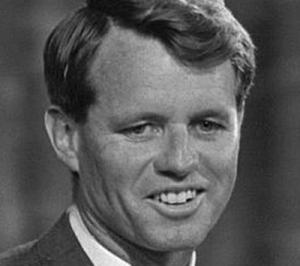 Another enemy was J Edgar Hoover, the FBI chief who denied that the Mafia existed and knew that as long as Kennedy was President, his days were numbered.

Oilmen such as Clint Murchison and H L Hunt, would lose millions when he removed a loophole whereby they paid very little tax, allowing them to give vast sums to extreme right-wing groups and individuals.

Robert Kennedy also had enemies, being the Attorney General, he was the instrument of his brother, attacking organized crime bosses and other corrupt individuals, such as Jimmy Hoffa.

After the death of his brother on November 11, 1963, his relationship with Johnson deteriorated even further.

On June 5, 1968, shortly after winning the Democrat nomination to stand at the November presidential election, he was shot and died the following day.
Although Sirhan Sirhan, the Palestinian assassin, pleaded guilty, there are numerous alternative theories.