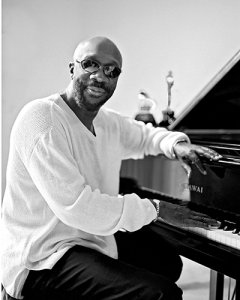 Isaac Lee Hayes Jr. was born on August 20, 1942 in Covington, Tennessee, and raised by his grandparents, due to the early death of his mother and his father abandoning him.
He worked on farms in his spare time, and continued studying until he graduated at the age of 21. His early interest in music lead to him being a proficient pianist before he reached his teens. As a child he played and sang at his local church and by his early twenties he was performing in juke joints and night clubs.

He became part of the Memphis music scene and it was as a session player at Stax Records that he first appeared on vinyl in the early 1960s. His talent for song writing was soon evident, composing hits for artists such as Sam and Dave. His compositions included Soul Man, You Don't Know Like I Know, and Hold On, I'm Coming.

He not only played with Booker T and the MGs, but produced several records with them.

His First album, Presenting Isaac Hayes was released in 1968, with Hot Buttered Soul following a year later, featuring the first of many reworked versions of Burt Bacharach compositions.
It was the soundtrack to Shaft that made him a global star and received an Academy Award for Best Original Song.
The seventies saw the release of more albums and TV themes but due to a debt of $6m he was forced into bankruptcy.
He enjoyed a brief chart success in 1979 and appeared in several movies over the following decade.

His prominence was revived once again in 1997 with his South Park debut as the voice of Chef and the success, particularly in the UK, of the song Chocolate Salty Balls.

He won a total of six BAFTA/Grammy/Golden Globe/Academy awards.
Due to the South Park lampoon on Scientology, Hayes parted company with the production company.
He continued to work in areas of film and TV right up until his death from a stroke on August 10, 2008.
He had been involved in various human rights and Scientology projects receiving a .
Being married four times, he left behind 12 children, 14 grandchildren and a few grandchildren.