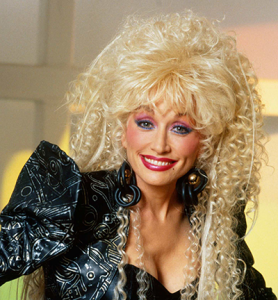 Dolly Rebecca Parton was born on January 19, 1946 in Locust Ridge, Tennessee, one of thirteen children in a poor family.
She escaped her frugal childhood through her love of music and was already performing by the age of ten. Within a few years she was writing her own songs and appearing on the local radio station.

On moving to Nashville in 1964, she co-wrote a number of hits with her uncle Bill Owens. She signed up to Monument Records where she survived for a couple of years as a pop singer,  before finally being allowed to record some country songs.
She married Carl Thomas Dean in 1966 and, keeping her own name, accepted a regular slot on the Porter Wagoner Show with a string of country hits following. But it was not until 1970 that she had success in the mainstream charts.

With a combination of her unique voice, vivacious personality, remarkable figure, and keen business sense, she strode

through the following decades with more hits, TV and movie roles and various ventures which included Dollywood.

She has starred and appeared in several dozen movies and TV programs along with writing and performing songs for many of them. Movie roles include Blue Valley Songbird, A Smokey Mountain Christmas, 9 to 5, The Best Little Whore House in Texas and Steel Magnolias.

By 2014 she had 42 albums behind her and had written over 3,000 songs.
She has received over twenty-eight music and film awards and been nominated for 145.

Through the sanctuary at Dollywood, she supports the American Eagle Foundation and the Dollywood Foundation supports Dolly Parton's Imagination Library supplying books to children around the world.

She has also contributed towards medical research and educational institutions.