1793 - The mission was secularized and abandoned.

1803 - The Louisiana Purchase, doubled the size of the United States placing Americans on the borders of Spanish controlled Tejas.

1821 - The Mexican Revolution brought Tejas under the tight control of the Mexicans.

1823 - The town of San Philipe de Austin was established as the headquarters of Stephen F. Austin's colonization effort.

1824 - Mexico established the Federal Republic of Texas, combining the area with Coahuila as Coahuila y Tejas. By this time, the San Antonio de Valero fort was commonly referred to as the Alamo.

1826 - US President John Quincy Adams offered Mexico $1 million for Texas, but was refused.

1830 - New laws inflicted on Texas include prohibition of immigration from the United States. Jim Bowie arrived in Texas.

1832 - Petitions are drafted at the Congress of 1832 and presented to Mexico.

1835 - October 2, the first shots of the Texas Revolution were fired at the Battle of Gonzales, when Mexican soldiers tried to retrieve a canon that was given to the town, to protect itself from Indians. The Texans refused to return the canon and cried out "Come and take it!".

1835 - October 9, the first Battle of Goliad occurred when Texans attacked the Presidio La Bahia near Goliad, where the Mexicans surrendered. The Texas troops carried away a vast quantity of provisions.

1835 - December 11, at the Siege of Bexar, Texas troops attacked the Mexican army at Bexar (now called San Antonio). This gave the Texans control of all important areas of Texas.

1836 - January 19, Jim Bowie arrived with around 30 men and orders to destroy the building, but Neill persuaded him otherwise.

1836 - February 11, Neill left the Alamo to recruit more men and to answer a personal request from his family.

1836 - March 2, Texans wrote the Constitution of the Republic of Texas and declared independence. Sam Houston was declared the Military Commander.

1836 - March 6, Santa Anna's army mounted an all out attack on the Alamo, taking no prisoners.

1836 - March 27, Santa Anna ordered the slaughter of around 342 Texan soldiers, after they surrendered at the Battle (Massacre) of Goliad. Colonel James W. Fannin was executed along with his men.

1836 - October 22,the Treaties of Velasco were signed by Sam Houston and Santa Anna, officially recognizing the independent territory of Texas.

1841 - Houston was inaugurated as the first President of Texas.

1848 - February, 2. The Treaty of Guadalupe Hidalgo was signed, so ending the Mexican - American War, with the Mexicans defeated and the United States gaining an extra 500,000 square miles of land.

1861 - The start of the American Civil War saw Houston resign from office as he would not side with the Confederacy. 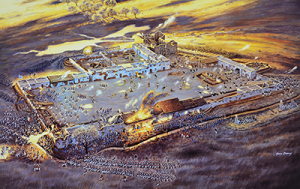 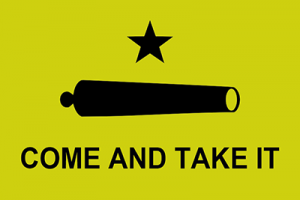