When you step over the threshold of the Riverside Hotel you are entering a museum. A preserved heritage site, dedicated to the blues musicians who once stayed there. 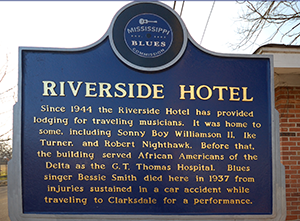 Back in the 1930's the building was little more than a shotgun shack. It served as the G. T. Thomas Hospital for the surrounding black community.
The building's first brush with the blues came on September 26, 1937 when the 41 year old blues singer, Bessie Smith, was traveling with her lover, Richard Morgan, on Highway 61. As they neared the Friar's Point turnoff the right side of their Packard collided with a truck. Smith's right arm was almost dismembered and after a futile attempt at roadside medical assistance, she was taken to the G. T. Thomas Afro-American Hospital in Clarksdale. Bessie Smith was operated on in what is now bedroom No 2, but never regained consciousness due to possible internal injuries or loss of blood.
It is suggested, but not proven, that the better equipped white hospital in the area refused to take her in. Had they done so she might have survived, but this is purely speculation.

When the hospital closed, Mrs. Z.L. Ratliff approached G .T. Thomas with a business proposition, she would convert and extend the property, for use as a hotel. A rental agreement was drawn u,p along with plans to extend the property to include a total of twenty one rooms; the Riverside Hotel was born in 1944.
In the dark days of segregation, the hotel started out as an African American only establishment and due to it's location in the Mississippi Delta region, attracted a large number of touring musicians. Z. .L. "Momma" Hill, as Mrs Ratliff was known, learned that allowing female guests often caused problems and decided to focus on male only residents.
Some of the more notable guests include Sonny Boy Williamson II, Robert Nighthawk, L. Franklin, Howlin' Wolf, Sam Cooke, John Lee Hooker, Muddy Waters and the Blind Boys of Alabama. Ike Turner was a temporary resident, along with Nighthawk, who met his second wife there. 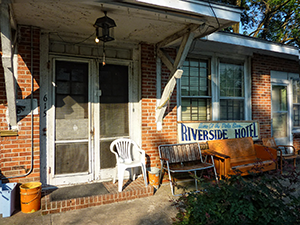 In 1951, IkeTurner wrote and rehearsed Rocket "88" on the premises, before recording, what many regard, as the first ever rock'n'roll single at Sun Studios in Memphis, Tennessee.
As a proficient seamstress, Mrs Ratliff made the the dresses for the Iketts and embroidered the Rocket '88' logos on the ties of the band members.

When G .T. Thomas died in 1957, Mrs Ratliff purchased the building from his widow.

Mrs Ratliff died thirty years later, passing the management to her son Frank. Affectionately known as Rat, Frank's relaxed, unassuming nature would see the business survive through recessions and political turmoil, eventually to relish in the renewed interest in the blues.

In 2007, the Riverside received the fourth Mississippi Blues Trail historical marker.
Frank Ratliff, sadly died on March 28, 2013, aged 72, passing the running of the hotel to his daughter, Zelma.

With the increasing interest in Delta Blues, the town of Clarksdale is like a desert cactus, bursting into flower for the various blues-related events each year.