Robert Livingstone and James Monroe left for France on a presidential mission to purchase New Orleans from the French, with a maximum budget of 10 million dollars. However, after fruitful negotiations the entire territory of Louisiana was purchased on April 11, 1803 for $15 million and on joining the Union, became the 18th state, on April 30, 1812.
This added a further 828,000 square miles doubling in size, the existing United States.
It was less than three years after this, that the true American spirit was evoked in order to fight the British when they tempted to take New Orleans. A melting pot of migrant races including Creole, Cajun, African, French, Spanish, Irish, German and Native Tribesmen fought alongside the US army and riflemen from other states 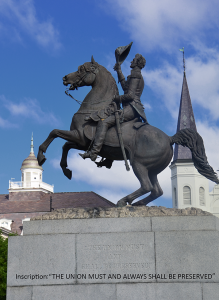 in order to protect American soil.

After less than fifty years of membership, Louisiana split from the Union and joined the Confederacy in what was, for Louisiana, a fairly short-lived war.

The restoration years witnessed many changes, with freed slaves gaining rights and the carpetbaggers moving down from the north.

Once mechanization gripped the nation, laborers were no longer in demand in the south and the migration moved west to California and north to cities such as Memphis and Chicago.

The early part of the 20th century witnessed racial tensions and segregation, the great depression and a war in Europe. The various ethnic groups developed a pride in their origins and although fiercely American, they established identifiable communities. Black musicians such as Louis Armstrong and Fats Domino, were not only accepted but became extremely popular throughout the entire country. Armstrong, in particular, achieved worldwide recognition and respect.

In some areas there still exists a whisper of the Confederacy and although there are many divisions, Louisianans are very proud American citizens.