The primary tribes of Tennessee include the Chickasaw, Cherokee, Yuchi, Creek, Koasati, Chisca, Chiaha and Quapaw, but wars and disease decimated their numbers.
Throughout the 18th century, the early settlers in parts of Tennessee and surrounding states, had problems with the Cherokee, Chickasaw and Shawnee. There were attacks, skirmishes and all out battles

The need for more settlements and agricultural land gradually eroded Indian territory.
This was solved by the Indian Removal Act, signed by Andrew Jackson 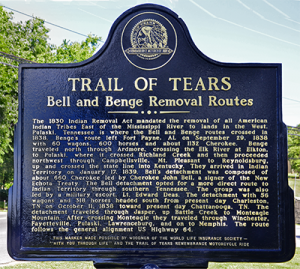 on May 28, 1830, stating that those tribes living east of the Mississippi, on American soil, were to be moved west. This removal covered areas east and south-east of Tennessee, with the Trail of Tears route, passing through the state, with the town of Pulaski (also the birthplace of the Ku Klux Klan) being at the intersection of two routes. The Trail of Tears Museum in Pulaski, offers further information.
Congressman David Crockett vehemently opposed this move, but his opinion, cost him precious votes at the next election.
Those tribes that would not leave voluntarily were 'assisted' by the US Army. Within a decade, close to 50,000 had be relocated with the loss of over 6,000 lives. Of all tribes, the Cherokee bore the greatest loss and suffering. Before the move they were a peaceful, productive nation. Their leaders, such as Major Ridge had worked with the fledgling American government. Their forced march took around four months to cross over 1,000 miles of inhospitable terrain, during one of the harshest winters on record.