Having been abandoned by his father, he lived in Louisiana with his mother until the age of six, when they moved to the South Central area of Los Angeles.

It was here that he grew up, with minimal parental control and lack of good role models. He lived on the streets, becoming an accomplished fighter and carrying a knife, prior to reaching his teens.

At the age of 17 he was introduced to Raymond Washington, they formed a gang called the Cribs, which later changed to the Crips, becoming one of the most feared gangs in American history. Williams' reputation as a fearless street fighter spread rapidly and along with Washington and a third gang leader named Marc Thomas they recruited hundreds of Crips gang members. Those that would not join, were deemed rivals and together these gangs formed the Bloods. 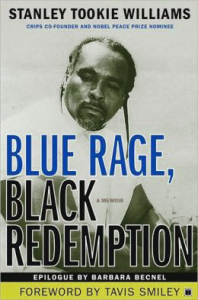 to prevent bloody battles between local gangs. however, the Crips became a monster that the founders could not control.

Washington was killed in an unsolved drive-by shooting on August 9, 1979 aged 25.

Stan 'Tookie' Williams was arrested for the murder of Albert Owens on December 28, 1979 in Whittier, California. He was also charged with a triple slaying in the Brookhaven Motel, Los Angeles and received the death sentence for both crimes on April 20 1981. His journey in San Quentin's Death Row, started in 1979 and (with over six years in solitary confinement) ended with his execution by lethal injection on December 13, 2005.

In the decades leading up to his execution, he had renounced gang violence, written books on anti-gang violence and was even nominated for a Nobel Peace Prize, with thousands of supporters around the world. Celebrities such as Snoop Dog and Jamie Foxx spoke out on his behalf.

His plea for clemency was rejected by the Governor of California, at that time, Arnold Schwarznegger and he was executed on December 13, 2005.