1813 - Santa Anna was involved in Gutiérrez–Magee Expedition, and the Battle of Medina, after which, he was cited for bravery.

1821 - Iturbide changed sides to fight for the rebels alongside Vincente Guerrero. Santa Anna fought bravely, driving the Spanish out of Veracruz and was promoted to General and given control of the city.

1822 - Iturbide removed Santa Anna from Veracruz, sparking a rebellion where Santa Anna and other military leaders removed Iturbide and created a new republic. Santa Anna used the military coalition for his own advancement and declared himself the protector of the federation.

1832- A rebellion started against Bustamante. with Santa Anna being offered command of their army.

1832 - After several battles between Santa Anna's and Bustamente, Gómez Pedraza was to be reinstalled as president with Santa Anna at his side.

1833 - Gómez Pedraza was made President on January 3, then on April 1, Santa Anna replaced him as President of Mexico. However, politics and governing was not to Santa Anna's liking and running the country was passed to his Vice President, Valentin Gómez Farías.

1834 - Santa Anna and Valentin Gómez Farías transferred the Presidency to one another on four occasions,. During this period Santa Anna dissolved Congress, centralized power and virtually became a dictator.

1835 - October 2, the first shots of the Texas Revolution were fired at the Battle of Gonzales, when Mexican soldiers tried to retrieve a canon that was given to the town, to protect itself from Indians. The Texans refused to return the canon and cried out "Come and take it!".

1835 - The Mexican state of Coahuila y Tejas rebelled against the new controls and on October 9, the first Battle of Goliad occurred when Texans attacked the Presidio La Bahia near Goliad, where the Mexicans surrendered. The Texas troops carried away a vast quantity of provisions.

1835 -December 11, at the Siege of Bexar, Texas troops attacked the Mexican army at Bexar (now called San Antonio). This gave the Texans control of all important areas of Texas.

1836 - January 19, Jim Bowie arrived at the Alamo with around 30 men and orders to destroy the building, but Neill persuaded him otherwise.

1836 - March 2, Texans wrote the Constitution of the Republic of Texas and declared independence. Sam Houston was made the Military Commander.

1836 - March 6, Sana Anna's army mounted an all out attack on the Alamo, taking no prisoners.

1836 - March 27, Santa Anna ordered the slaughter of around 342 Texan soldiers, after they surrendered at the Battle (Massacre) of Goliad. Colonel James W. Fannin was executed along with his men.

1836 - October 22, the Treaties of Velasco were signed by Sam Houston and Santa Anna, officially recognizing the independent territory of Texas, although Mexican authorities stated that he was no longer President.

1838 - The Mexican government once again gave Santa Anna control of the troops to fight off a French invasion. In the skirmish, his left leg was injured and required amputation.

1838 - He was appointed interim president for a period of four months.

1841 - He returned to power as President and dictator.

1843 - Santa Anna re-assumed his presidency, governing the country from March to October.

1844 -The death of his wife, Inés García's, urged him to marry María de los Dolores de Tosta. His dictatorial rule was resented and he was arrested and imprisoned, then exiled to Cuba.

1846 - At the start of the Mexican-American war (1846 - 1848) Santa Anna offered his services to both Mexico and America, only to renege on his agreements, as he attempted to reinstall himself as President,.

1853 - He moved to Turbaco, Columbia and in April, was offered control of the country and declared himself the Most Serene Highness, proceeding to siphon money from the state and sell off more land to the US.

1854 - The The Ayutla Rebellion removed him from power.

1855 - He once again fled to Cuba in self exile after he was found guilty of treason and his assets were seized by the state.

1869 - He lived in Staten Island, New York, where he is credited for inspiring the first commercial production of chewing gum.

1874 - Almost blind and crippled, he returned to Mexico.

Regarded as the Napoleon of the West, Antonio de Padua María Severino López de Santa Anna y Pérez de Lebrón, was one of the most brutal, untrustworthy, charismatic and resilient leaders of his time. Known throughout history as Santa Anna, he was born on February 21, 1794 in Xalapa, Veracruz, Mexico and died in Mexico City on June 21, 1876. He acted as President of Mexico on numerous occasions, ruling as an egocentric dictator. He was better skilled at leading an army and going fearlessly into battle than governing a nation. His egotistic command would eventually lead to his downfall. The needless slaughter of Texian soldiers at the Alamo and Goliad incited a fearless revenge in all Texians. 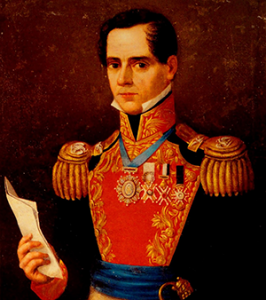 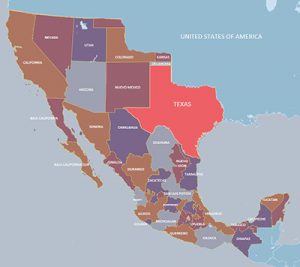 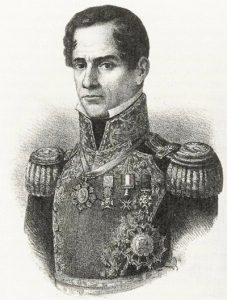