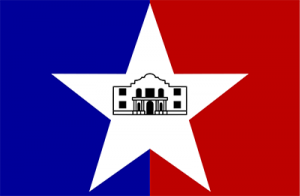 The city of San Antonio today enjoys a perfect combination of being both a, modern commercial hub and an important heritage site.
Apart from the Alamo and other historic missions, the Spanish/Mexican cultural influence is everywhere. However, the almost subterranean River Walk gives the city a unique twist, a modern gem in an historic crown.

It was the construction of the Spanish mission in 1724, now known as the Alamo, that encouraged the growth of the surrounding town of Villa de Béjar, which, over the following decades became the largest town in the state of Tejas.

The Mexican Revolution, in 1821, brought Béjar under the control of the Mexicans, which was not to the liking of the Texas people, especially 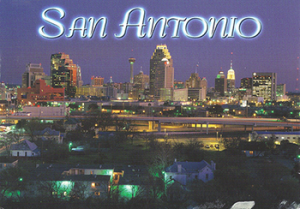 the American and European settlers.
The new regulations laid down by Santa Anna's dictatorial presidency in 1833, were too much for the Texians to live with.
After a decade of peaceful bids to gain their independence from Mexico, the first shots of the Texas Revolution were fired at the Battle of Gonzales, when soldiers tried to retrieve a canon that was given to the town, to protect itself from Indians. The Texians refused to return the canon and cried out "Come and take it!".

Bexar was an important and strategic town for Mexico and its army had fortified and occupied the mission for over a decade. 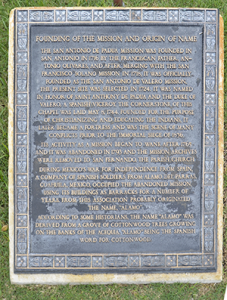 On October 27, 1835, Stephen F. Austin sent Colonel Jim Bowie and Captain James W. Fannin to find a secure place to lay siege to the town. With 90 men, they settled by the Concepción mission, sending word for Austin and his troops to join them. Seeing this opportunity, the Mexicans attacked Bowie and Fannin, yet due to the Texians position and the poor quality gun powder used by the Mexican soldiers, they retreated back to Bexar after a brief 30 minute battle. The Battle of Concepción inspired Austin's army and deflated the Mexican morale.
The Grass Fight was the result of the Texians learning of several dozen Mexican soldiers with laden mules, moving a few mile outside of the protection of Bexar. Bowie gathered several riflemen and with a hundred infantry in support, they attacked, drove back the Mexicans and were to steal the contents of the saddle bags, only to discover that they were filled with grass.
This was an indication as to how desperate the Mexicans were to keep their horses and livestock alive.
Austin's troops moved into the besieged town on December 7 and by December 10, 1835 the Mexican army had surrendered, having retreated into the Alamo.
Within two months, Bowie, Crockett and Travis would be on the inside of the fort, preparing for their final battle.

Although, after being defeated at San Jacinto, Santa Anna signed the Treaties of Velasco agreeing to Texas' independence, Santa Anna returned to power, and in March 1842 Mexican soldiers occupied the town for several days. Then in September, General Woll and 1200 Mexican troops raided again, capturing 52 citizens. Woll was coaxed into battle by the Texas army, but eventually retreated.

San Antonio escaped the Civil War, but on the edge of the civilized west, suffered from Comanche raiding parties.