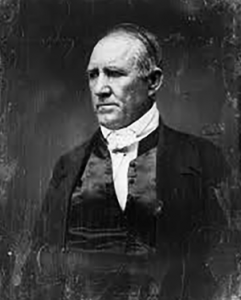 Although not a native Texan, Sam Houston is intrinsically linked with Texas history and the founding of the independent state.
Samuel Houston was born on March 2, 1793 on the family plantation in Rockbridge County, Virginia. Possessing the adventurous spirit of his Scots-Irish ancestors, he left home aged sixteen and lived with a tribe of Cherokee Indians. A few years later he returned to his family in Maryville, Tennessee and accepted the post of schoolmaster. He joined the infantry to fight in the war of 1812 and was wounded a year later at the Battle of Horseshoe Bend. He resigned from the army in 1818, passed the bar examination and oped his own legal practice. Becoming involved with state politics, he was elected to the House of Representatives in 1822 and became Governor of Tennessee in 1829.
However, his personal life intervened, resulting in his wife leaving him and his resignation from office. He went back to living with the Cherokee, where he met his second wife.

Houston had remained a staunch supporter of Andrew Jackson and many considered him as Jackson's protégé although their opinions differed of the treatment of the native tribes.
Through this, Houston became involved in a feud with another Congressman, resulting in Houston beating the man with a cane and escaping with his life after a pistol misfired. He was arrested, found guilty of assault, fined $500 for damages, but absconded to Tejas in 1832, before payment was due.

He became embroiled in the fight for Teas independence and was appointed Commander in Chief in October, 1935 and Major General on

November, 12.
Santa Anna moved his troops towards San Antonio and on to the Alamo.
Texas independence was declared on March 2 and four days later the Alamo had fallen with American heroes such as Davy Crockett, Jim Bowie, William Travis and James Bonham among the dead.
Santa Anna was unstoppable, moving to Goliad, where he executed Fannin and 400 volunteers.
Houston's so-called army increased in number from 300 to 600 to 900, yet not disciplined or experienced enough to face Santa Anna. Houston retreated, to heavy criticism from his men.
Camped by the River Brazos at the end of March the number of troops had grown to around 1,500 and after resting and training his soldiers, Houston learned of the Mexican weakness of taking an afternoon siesta. Seizing this opportunity on April 21, the Texians attacked the sleepy Mexican camp, taking no prisoners, leaving 600 dead in a period of 18 minutes. With the fleeing Santa Anna taken prisoner, they signed the Treaties of Velasco.

Houston became the people's hero, being elected President of the Republic of Texas on two occasions.
The Alan Brothers decided to name their newly founded city on the banks of Buffalo Bayou after the victorious Major General.

Houston married for a third time in 1840, to Margaret Moffatte Lea. She helped him cut back from his drinking and they raised eight children over a 17 year period.

It was not until 1845 that the United States felt comfortable enough (there were issues of slavery and Mexican aggression) to annex the lone star state, making it the 28th state of the Union. Houston was elected to the U.S. Senate and served for over 12 years.

When Texas seceded in 1861, prior to the Civil War, Houston reigned from politics, only to die of pneumonia on July 26, 1863, at home with his family.