"New Orleans is like the bad-kid island in Pinocchio" - Jonah Hill, actor, producer. 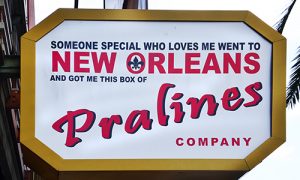 And certainly, the city must rate as one of Americas greatest guilty-pleasures.
Inhabited by the native Chitimacha people until the arrival of the French, the land was named after Philippe d'Orleans, Duke of Orleans, France.
The French controlled the city from 1718 until 1763. when the Spanish gained control, only to pass it back twenty seven years later. Louisiana was then sold to the United States in 1803.
The city survived two great fires, 1788 and 1794, with the loss of many landmark buildings, but few lives.
In 1812 General Andrew Jackson defeated the British in the Battle of New Orleans and by the 1840s thousand of Irish and Germans had settled.
The 19th century saw New Orleans rise in stature, becoming an important hub in the transportation of produce and a vital sea port. By 1840 it hosted the biggest slave market in America.
Claimed from the swamps, the city had poor sanitation and no fresh drinking water, leaving it subject to several epidemics of yellow fever and cholera. In 1853 over 8,000 lives were lost through a yellow fever epidemic.
Famous for its architecture, music, cuisine and Mardi Gras, the city also holds many secrets. Stories of organized crime and corruption hide in the shadows along with the dark days of slavery.
From the end of the 19th century the city was a music Mecca, spawning some of the worlds finest jazz musicians. This has extended into today's lively club scene.
Surviving hurricanes and wars, New Orleans today is a vibrant, tolerant city, where the senses are teased and intoxicated, leaving its visitors with memorable and treasured experiences.