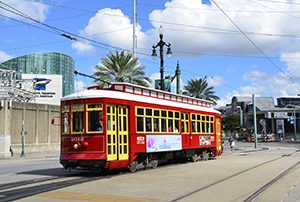 There are three main Streetcar lines in the city. The St Charles Avenue Line (built in 1839), the Canal Street Line and the Riverfront Line. The 2013 opening of the Loyola/UPT Line added an extra 1.6 mile loop to the service linking the Union Passenger Terminal to the Business District and other Canal Street lines.

The St Charles line boasts at being the oldest continuously operating service in the world, with cars dating back to the 1920's running on the 13.2 mile crescent shaped route.
Starting in 1835 with a carriage pulled by a locomotive, this changed to a horse drawn carriage after problems with pollution, Finally, the line was electrified in 1893.

The St Charles Streetcar was named a National Historic Landmark on September 30, 2014, this is one of 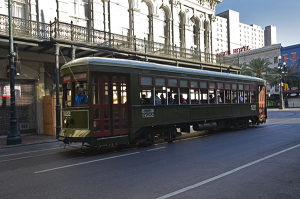 only two moving National Historic Landmarks along with the San Francisco Cable Car.
It is estimated that over ten thousand people ride the St Charles line each day.

On the Canal Street and Riverfront Lines you will find more modern air conditioned cars.

To ride the cars you pay $1.25 in change when you board, for a single ride, or buy a $3.00 day-pass (Jazzy Pass) from the driver/conductor. For longer periods, 3 day and 31 day passes can be purchased from the RTA on-line, ticket machines and several business locations. Check before you travel.