McKinley Morganfield was born on April 4, 1915, in Rolling Fork, Mississippi, although it might have been Jug's Corner, Issaquena County, Mississippi, a couple of years earlier.At the age of three, his mother died and his father had already left home, leaving the infant to be cared for my his grandmother, Delia Jones, on the Stoval Plantation in Coahoma County, Mississippi. 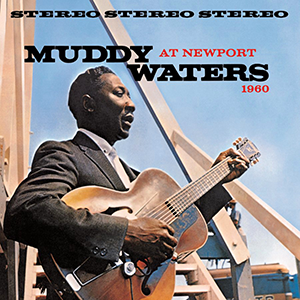 As a child, he was affectionately called Muddy Water because he loved to play in the muddy pools at Deer Creek on the Mississippi. By his early teens, Waters was an accomplished harmonica player and had learned to play the guitar by his mid teens, performing at parties and juke joints, traveling the Delta region and venturing up to Memphis.His marriage to Mabel Berry in 1935 lasted two years and his second marriage to Sallie Ann Morganfield was just as brief, but his marriage to Geneva Morganfield would last until her death.Fellow musician and friend, Robert Nighthawk played at his first wedding and from earliest public performances on the streets of Clarksdale, Waters would have encountered John Lee Hooker, Son House and Robert Johnson.
In 1941 Waters joined a traveling tent show, of which there were many touring the country.
Being discovered and recorded in 1941 and 1942 by Alan Lomax for his Library of Congress Field Recording project, Waters achieved greater recognition for his unique style.In 1943 he headed up to Chicago and survived like other musicians, working in a factory by day and playing clubs at night; his reputation grew and he made several recording and commenced his 30 year relationship with Chess Records. He worked and recorded with some of the city's best musicians, including Little Walter, Howlin' Wolf, Jimmy Rogers and Otis Span. 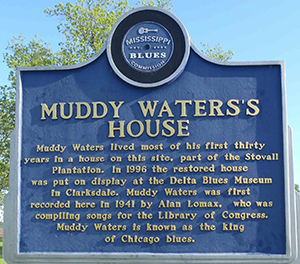 He toured England in 1958 and returned there in 1972, to work with several English blues artists. His popularity remained throughout the 1960's and after the death of his wife, he reunited with some of his children and later remarried in 1979.
Waters performed at the 1981 ChicagoFest, recorded a live album with the Rolling Stones at Chicago's Checkerboard and a year later with Eric Clapton in Florida, but his health was in decline and on April 30, 1983, he died in his sleep, at his home in Westmont, Illinois.

He has been cited by dozens of international stars as a great influence on their choice of songs and careers.