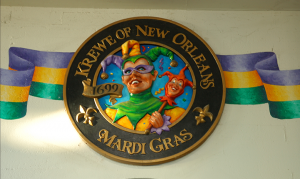 Mardi Gras arrived in Louisiana with the French in 1699 and was first celebrated publicly four years later in Mobile (then part of Louisiana), but it wasn't until after New Orleans became the capital in 1723 that the most famous Mardi Gras could be established.
The first Krewe was formed in 1856 and nineteen years later it was declared an official state holiday.

Mardi Gras translates as Fat Tuesday. the last day before lent when certain rich foods should be used up before the religious practice of fasting for the forty days before Easter. This is based on Christ going into the desert for forty days and forty nights and returning to face his trial and eventual crucifixion. 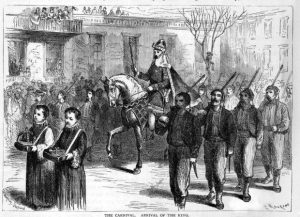 In many parts of the world this is called Shrove Tuesday, derived from the word shrive, referring to the absolution of sin. It is known as Pancake Day in the United Kingdom and Maslenitsa in Russia. Many other countries celebrate by eating pancakes.

Part of the Lenten fasting includes abstaining from eating meat (and pleasures of the flesh), which in some Mediterranean countries is referred to as 'carne vale' or farewell to meat. Hence, 'Carnival'.

Many Mardi Gras participants wear masks, similar to those worn at the Venetian Balls, which are also held on Shrove Tuesday.

Most Christian celebrations are based on pagan feasts and do not reflect the dates of the events celebrated. Mardi Gras is always 46 days before Easter, which is the first Sunday after the first full moon following the Spring Equinox.

Although New Orleans hosts one of the most famous parades, many cities throughout Louisiana have their own Mardi Gras celebrations and parades.

Over the next decade Mardi Gras fall on the following dates: