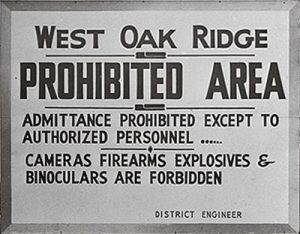 In the rolling hills of East Tennessee, you might not be surprised to find an illegal moonshine still or a bluegrass band rehearsing on a shaded porch. But back in 1943 an entire secret town was under construction. This was one of over a dozen sites, scattered across America like a huge jigsaw where very few people were privy to the overall picture.
Oak Ridge was home to the uranium enrichment plants, the liquid thermal diffusion plant, and the pilot plutonium production reactor

Starting with the acquisition of 59,000 acres of land, evicting many residents whose families had farmed in the area for 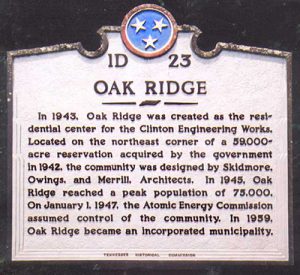 generations, Nestled in the hills and close to power supplies, road and rail connections, it was a perfect choice.
The initial plans were to build homes for 30,000 people, but by 1945 this had increased to 75,000.

The town was completely sealed off from the outside world with access strictly by permit and a code of secrecy. The production plants were located some distance from the town, in case there should be any 'accidents'. Very few people knew o the exact nature of what they were working on. This was fully realized on 6 August 1945, when the atomic bomb was dropped on the city of Hiroshima, Japan.