Louisiana is still regarded as the murder capital of America.
Recent statistics, sadly support this statement with the murder/manslaughter rate per head of population maintaining number one position, double that of California and four times greater than Wyoming.

Underlying factors include poverty, sub-standard education, heat and fairly relaxed gun laws.
It is permitted to openly carry a handgun and permits for concealed weapons are not difficult to obtain and last a lifetime.
Nearly 70% of all homicides in the US are gun related and the state upholds the fundamental right to own guns.
Gun violence is greater in black communities and Louisiana has a higher than average proportion of black residents.

Louisiana is also regarded as America's prison capital, with over twice the national average and more than three times as many inmates per head of population than the state of New York.
Louisiana is also a world leader in this field, beating such countries as China and Iran.

The death sentence in Louisiana is by lethal injection, but the chances of receiving this are less than in many other states. Louisiana ranks around tenth position.
However, a black perpetrator has a 90% greater chance of this if the victim is white.
The most common drug used nationwide is pentobarbital.
The current death row population is 85.

The State Penitentiary based at the former Angola Plantation, is the largest in America and houses around 5,000 prisoners.

From the pirate Jean Lafitte, to the current day criminals, the history books, newspaper columns and prison cells will never be lacking in content. 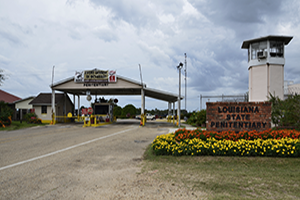 Occupying the grounds of the former Angola plantation, the prison adopted its name, probably derived from an area in Africa where many of the slaves originated.

The prison was controlled under the lease system from 1880 to 1901, when it transferred to state control.

Throughout the first half of the 20th century, more land was purchased and the original 8,000 acres extended to its current size of 18,000 acres. During this period the regime gained notoriety for its harsh treatment and brutality.
By the 1960's Angola had a reputation as the bloodiest prison in the South. It took a further ten years for necessary reforms, including medical care to be instigated.

Many of the prisoners work 40 hours a week on the land or in workshops. The crops grown include wheat, soybeans, corn, strawberries,

onions, tomatoes beans and peppers. 'The Farm', as the prison is often called, also supports a 1,500 strong herd of beef and over 200 horses.

Not only is it the largest maximum security prison, but there are more prisoners serving life sentences in Angola than in any other US prison.

Bordered by the Mississippi on three sides and the Tunica Hills on the fourth, the prison is often referred to as the Alcatraz of the South.

The museum houses 'Gruesome Gertie', the electric chair used by the state to carry out 87 executions from 1941 through 1991.

Infamous inmates include the blues singer Leadbelly, Carlos Marcello and the Angola Three, famous for being members of the Black Panther Party and attempting to bring about prison reform when systematic rape and violence were considered by some as part of the punishment.

Today, the prison is known for its Sunday Rodeos and being featured in novels and movies such as Dead Man Walking, the Green Mile and several James Lee Burke novels.