John Lee Hooker was probably the most successful bluesman of his generation, with a career lasting over sixty years.

Born in Clarksdale, Mississippi on August 22, 1917, he learned to play guitar under tuition from his stepfather, William Moore. The style was not a perfect fit with that of the of Delta blues, but it gave Hooker a unique style making him stand out from other guitarists. Moore is said to have taken the young Hooker into Clarksdale to play with such blues legends as Blind Lemon Jefferson and Son House. 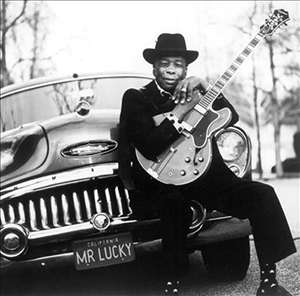 John Lee left home in his early teens, signed up in the US Army, but was rejected when his true age was discovered. He then moved to Memphis, where he worked in a movie theater on Beale Street, meeting up with fellow musicians such as Robert Nighthawk, Robert Johnson and Muddy Waters.
A few years, later he headed out to Cincinnati and then in 1943 landed in Detroit. He settled in the Black Bottom neighborhood, where there were plenty of night clubs, with artists such as Count Basie, Duke Ellington, Billie Ekstine and Ella Fitzgerald, appearing among a multitude of lesser known jazz and blues musicians. Due to the motor industry and manufacturing, Detroit was a fairly affluent city during and after the second world war.
Soon after his arrival in 1943, he met and married Alma Hopes, then divorced her and married Sarah Jones. His second marriage ended in divorce in 1944, only to marry Maude Mathis that same year. Those three marriages produced eight children. From the mid to late forties, he traveled around, venturing down to Mississippi and staying at the Riverside Hotel in Clarksdale. 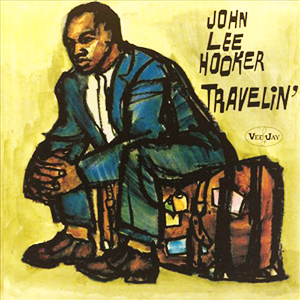 Hooker cut his first single, Boogie Chillen, in 1949 and went on to write and perform many hits such as In the Mood, Dimples, Crawling King Snake and Boom Boom. He also recorded under the pseudonyms of John Lee, John Lee Booker, John Lee Cooker, Delta John, Birmingham Sam and his Magic Guitar, Delta Sam and Johnny Williams.

His first collaboration with contemporary artists started with the English blues musicians, John Mayall and the Groundhogs in 1965. Although it is doubtful that Mayall actually appeared on this album, the Groundhogs were Hooker's backing band on his UK tour of 1964.
An album with Canned Heat followed in 1971 and he appeared in the Blues Brothers movie in 1980. Then came the The Healer album in 1989, on which he sang with artists such as Charlie Musselwhite, Carlos Santana and Bonnie Raitt. With Raitt he recorded I'm in the Mood, which won a Grammy for Best Traditional Blues Recording. Bonnie Raitt described recording the song in a dimly lit studio as "One of the highest erotic experiences of my life." Hooker had turned seventy by this time.

On the Mr Lucky album in 1991, he worked with guest session musicians including Keith Richards, Booker T. Jones and Van Morrison.
He continued touring and although he had cut back on live performances, he opened the John Lee Hooker's Boom Boom Room blues club in San Francisco, in 1997.

It is very possible that as he closed his eyes for his final sleep, he was planning his next album. John Lee Hooker died on June 21, 2001 in his California home.