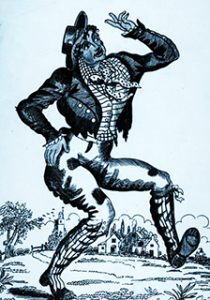 The name derives from a black buffoon character portrayed in minstrel shows that entertained the generally white audiences of the 19h Century.

The name alone is a derogatory term, aligned with the segregation laws that it represented, it insured that the black population remained as second-class citizens.

The laws and wording varied from state to state but in essence, they called for segregation in almost every instance where blacks and whites were likely to mix or share a common facility.

Starting in Virginia in 1870, where school children were the first to be separated, it expanded in both application and states, despite the Civil Rights bill of 1876.
Within a year Jim Crow had spread spread South, like a wildfire.

This particular example could be applied to almost anywhere.

Restaurants: It shall be unlawful to conduct a restaurant or other place for the serving of food in the city, at which white and colored people are served in the same room, unless such white and colored persons are effectually separated by a solid partition extending from the floor upward to a distance of seven feet or higher, and unless a separate entrance from the street is provided for each.

There were laws covering education facilities, all forms of transport, sport and recreation, living quarters, eating and drinking establishments, retail premises, medical centers and many more.

If a black man were to glance at a white woman or question the correctness of a white man he could be imprisoned or fined, with only a white court to appeal to.

On numerous occasions, vigilante groups such as the Ku Klux Klan would carry out their own distorted version of justice, abducting and hanging helpless victims, guilty of nothing more than being born a different color.

Lynching was often the easy answer for the untouchable, white supremacists; between 1882 and 1951 over 3,000 blacks lost their lives at the end of a rope.

Although the Ku Klux Klan started in Tennessee in 1865, it soon spread south, where hatred and resentment of freed blacks was commonplace. Inspired by secrecy and self-righteousnesses, these early Klansmen destroyed the lives and welfare of thousands of black citizens in the south.
Intimidation and lynching gave them power and in many areas, the local law officers looked the other way, or were even involved themselves.
With the introduction of the Jim Crow laws in the 1870's, the Klan gained momentum, along with the support of openly racist, democrat parliamentary groups, such as the Red Shirts and White League who systematically opposed, intimidated and defeated the Republicans.

However, over the following decades, with the changing politics and economic upturn, the appetite for extreme discrimination waned.
The Klan were all but extinct until 1915 and from these embers a new Klan arose in the twenties to become, once again, a feared, secret society standing for white supremacy and persecution and segregation of blacks. With membership in Louisiana of up to 30,000 in the twenties, popularity once again dwindle to as low as 3,000 in the late 1960's.

At this time the Civil Rights movement gained strength and black extremist groups such as the Black Panthers gained notoriety.

The seventies witnessed the last revival which peaked with a national membership of around three and a half thousand before, once more dropping into the realms of subversive cults and extremists.

The KKK still exists in Louisiana today. The recent distorted rhetoric from Donald Trump has emboldened many fight wing groups and further extended membership of the league.