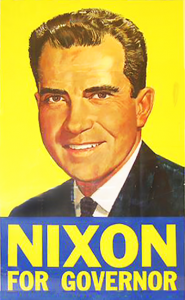 Richard Nixon was born in Yorba Linda, California on January 9, 1913 ,one of four brothers in a Quaker family.

He graduated with a law degree and was admitted to the bar in 1937. he practiced in a California law firm being made a full- time partner in 1939. He met and married Thelma Pat Ryan with the marriage producing two daughters. He enlisted with the United States Navy in 1942 and during the Second World War, receive two commendations for his services. He had been promoted to Lieutenant Commander by the time he resigned his commission at the start of 1946. 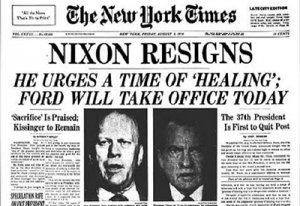 It is very likely that Nixon knew and associated with people such as H L Hunt and Clint Murchison, but there are no credible connections to the Mafia.

Nixon ran again for the presidency, taking office in January 20, 1969 as America's 37th president but in 1972, under Nixon's orders, the Watergate offices of the Democrat Party were burgled by a team which included five Cubans, along with ex-CIA officers, E Howard Hunt and James McCord.

He resigned his presidency on August 9, 1974 following the Watergate scandal.