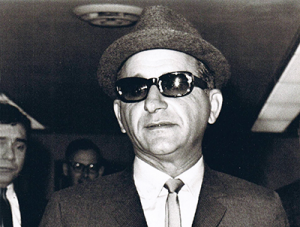 Salvatore Giangana was born on June 15, 1908 and known as both Mooney and Momo, referencing the lunar (lunatic) nature of his personality. Diagnosed as a psychopath with antisocial trends by a military psychologist, he escaped service in the Second World War.

He grew up on the streets of West Chicago, with childhood friends such as Charlie Nicoletti, who would end up with him, as part of the Chicago Mob.
Giancana worked his way through the ranks of Al Capone's crew, from driver to hitman, proving himself a worthy leader through fearlessness and 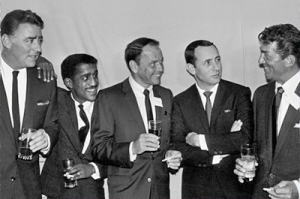 brutality. He married Angeline DeTolve in 1933, producing three daughters.
After Capone's imprisonment for tax evasion, Paul Ricca assumed control with Tony Accardo at his side and their hold over the Outfit lasted for several decades. Due to threats from the IRS they stepped back from front-line control allowing the likes of Sam Giancana to step in as boss, but no murders or important deals could take place without Ricca and Accardo's approval.
Giancana expanded the Outfit's business interests in Las Vegas, Los Angeles, Mexico and Cuba. He enjoyed the limelight and had a long standing friendship with Frank Sinatra and Marilyn Monroe. He owned the Cal Neva casino in Lake Tahoe, with Sinatra as a front, where the Kennedy brothers could meet with Monroe. 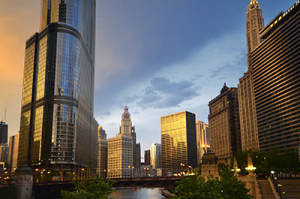 Through Johnny Roselli he became embroiled in the CIA's ill-fated plot to assassinate Castro. Other associates, Carlos Marcello, Santo Trafficante and Meyer Lansky were also involved along with the Teamster's boss, Jimmy Hoffa. The Mafia had lost millions of dollars in income through Castro's regime.
The same names surfaced again after the assassination of John F Kennedy and once again there was good reason to suspect their involvement.

After allegedly helping to rig ballots and get John F Kennedy into the White House, Robert Kennedy turned on the Mafia bosses, successfully extraditing Carlos Marcello and hounding Giancana and even jailing Hoffa.
When appearing before a Grand Jury in 1966, Giancana failed to cooperate and spent a year in prison. On release, suspecting that he was in danger, he moved to Mexico, where he remained for several years.

Returning to Chicago in 1974, aged 66, he faced an icy reception from his mob associates and was summoned to testify in another inquiry into the Castro assassination plot.
Before this could happen, on the evening of June 19, 1975, he died of multiple gunshot wounds, assailant unknown.