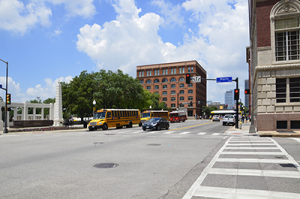 Meyers was a casual friend of Jack Ruby, having made his acquaintance from visiting Ruby's Carousel nightclub.

He was born on December 16, 1910 in New York and married with three children. He traveled extensively as a sales manager, with business meetings in Dallas.

When Jim Garrison carried out his investigation in 1967, he found interesting phone records from the offices of W Wray Gill, dated September 24, 1963, connecting Meyers to David Ferrie.
Possibly just another strange coincidence, but the records list a call to a Chicago number, which happened to be the central line for a hotel/apartment block in Chicago where a lady by the name of Jean Aase resided.
Lawrence Meyers and Jean Aase journeyed to Dallas and stayed one night, November 21, at the Cabana Motor Hotel.. Later that evening, they met with Jack Ruby in the Bon Vivant bar, Eugene Brading (.Jim Braden) was also there that night. Meyers was possibly with Ruby when he made a call to Carlos Marcello from the back room of the Campisi's Egyptian Lounge restaurant.