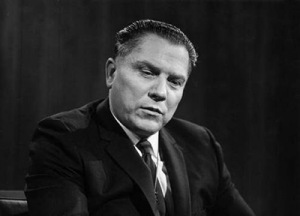 Hoffa was born in Indiana on February 14, 1913 to working class parents and married Josephine Poszywak when he was twenty three.

Within his first years of employment he stood up to over-demanding bosses and through his steadfast yet confrontational personality, became involved with the unions.
Not shy of publicity and fighting for a cause, he rose through the ranks of the Teamsters becoming National Vice President in 1952, then President in 1958.
His Union work, being important to US manufacturing during WWII, enabled him to be deferred

from service in the Armed Forces.
Organized crime syndicates had a grip on many areas of union control and Hoffa was regularly seen with Sam Giancana, Santos Trafficante and Carlos Marcello. It is suggested that he was a go-between in the plotting of the assassination of John Kennedy by these three Mafia bosses.

Senator John McLellan initiated investigations into organized crime and Hoffa was trawled in the same net, which later involved Robert Kennedy as investigator.
When Kennedy was appointed Attorney General, he focused heavily on Hoffa and the Mafia. Hoffa was successfully convicted of bribery and pension fraud (lending Teamsters pension funds to the Mafia) and sentenced to 13 years, which was commuted by Richard Nixon in 1971, allowing Hoffa to walk free. One clause in Nixon releasing Hoffa from prison prevented him from involvement in union activity until 1980, which angered Hofffa. 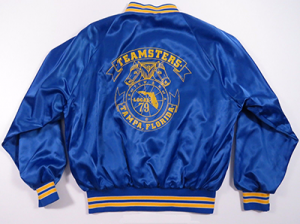 Coincidentally, the La Costa resort near San Diego, California, was built using a loan from the Teamsters pension fund and managed by Moe Dalitz with links to Meyer Lansky and used by Richard Nixon and Jim Braden.

Jimmy Hoffa was last seen at 2:45 pm on July 30, 1975. There were several mob-related suspects, but his remains were never found and nobody was ever arrested.