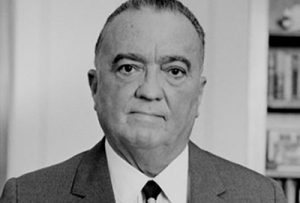 The first day of the year 1895 witnessed the birth of John Edgar Hoover, to parents of German, Swiss and English ancestry, although many have speculated that there was more than a hint of mulatto in his genes.

He left university with a law degree and started employment with the Library of Congress in Washington, DC, a short distance from his home.

During the 1930's, gangsters and bank robbers became as famous as movie stars and Hoover set out to make a name for himself, being named in the death or capture, of people such as Machine Gun Kelly, John Dillinger and Alvin Karpis.

The Federal Bureau of Investigation was created in 1935, and within five years Hoover had reshaped 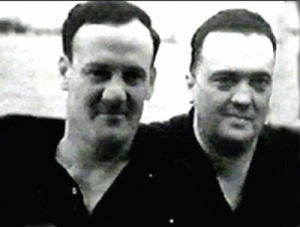 the structure to accommodate the collecting, filing and analyzing of information.

Over the following decades, however, Hoover involved the Bureau in Nazi hunts, and the inevitable persecution of communists.

Hoover's power increased each year as more information was gathered, some of it on powerful and influential people, building a fortress around Hoover and the FBI.
He appointed his 'partner' Clyde Tolson as Associate Director of the FBI. They were inseparable.

During the fifties, he chose to ignore organized crime and focused on his right-wing principals, developing friendships with politicians and Texas oil men such as Clint Murchison and H L Hunt.
Hoover and Tolson enjoyed their own cabin at the Del Charro Hotel in La Jolla, California, owned by Murchison and his friend Sid Richardson. The FBI pair also had their own box at the hotel's racetrack, with Hoover getting special tips for the winners.

Lyndon Johnson was a particularly close friend and ally. As the 1960's commenced, both had a strong dislike of John and Robert Kennedy.

Hoover remained as 1st Director for 37 years, serving under six consecutive presidents, , until he died in his home on May 2, 1972.