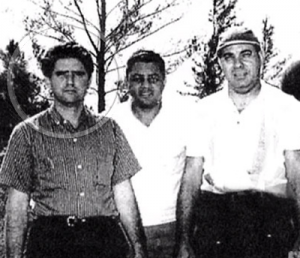 Herminio Diaz Garcia was born in Cuba in 1923 and worked there in the Mafia-owned casino business under Santo Trafficante.

He has been linked to over a dozen murders including that of Pipi Hernandez at the Cuban Consulate in Mexico, in 1948 and the attempted assassination of President Jose Figures of Costa Rica and Cuba's Fidel Castro. There is speculation that he worked for the CIA.

Based in Miami after the Cuban Revolution, he worked for Manuel Antonio de Varona y Loredo (Tony Verona) the exiled Prime Minister of Cuba, and Santo Trafficante. He was a skilled marksman and like most Cuban exiles. felt let down by Kennedy's inaction against Castro.