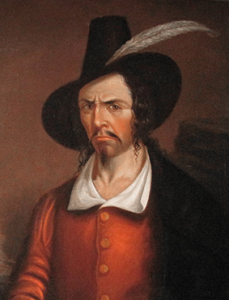 His exact birth place is uncertain, but believed to be Saint-Dominigue in the year of 1776 or thereabouts. Very few facts document his life until the early 19th century when tales of smuggling and piracy were first noted. Working closely with his brother Pierre, it is believed that they ran their 'business' from a warehouse in New Orleans and possibly maintained a Blacksmith's (now a bar) as a cover for their illegal operations. They found the embargo on English trading ships very advantageous as they were a legitimate and easy target to plunder and would not attract unwanted attention from the American authorities. The island of Barataria offered a perfect, natural base, several miles south of New Orleans, hidden from passing vessels and surrounded by narrow channels, which were not easy to navigate. Baratara developed into a thriving marketplace for illicit goods and Lafitte's fleet of ships rapidly 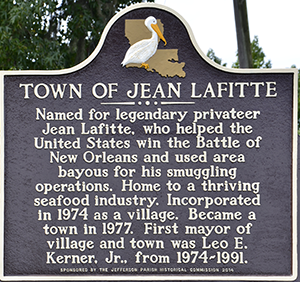 expanded. However, in September of 1814, the Lafitte's island warehouse was raided by the authorities, capturing what remained of his fleet and dozens of his men. Lafitte escaped capture and offered his support in the war against the British in return for clemency. Andrew Jackson arrived in New Orleans in December 1814 and being short of crew for the confiscated ships accepted the offer. After the battle, Lafitte and his men were pardoned of their crimes and he was regarded as a hero. Not content with a normal life, in 1816, he moved along the coast to Galveston Island, similar in its formation to Barataria. He sided with Spain when Mexico was fighting for independence, although Texas was Mexican territory at that time. His new base turned into a small town with around two hundred citizens and a large privateer fleet, flying Spanish flags. The ban on importing slaves gave him immense opportunities in human contraband. He would raid slave ships and sell the captives to other slave traders such as the Alamo hero, Jim Bowie. In 1821 the authorities raided his base and Lafitte escaped, only to set up bases off of Cuba, even accepting a commission from Columbia to captain one of its vessels. He continued to engage in piracy until the night of February 4th 1823 when he misjudged a couple of easy targets, which turned out to be two heavily armed Spanish warships. During the ensuing battle Lafitte was mortally wounded and subsequently died in the early hours of February 5th. He was buried at sea. Many landmarks bear his name, including the town of Jean Lafitte, in Bayou Barataria, Jefferson Parish, Louisiana.