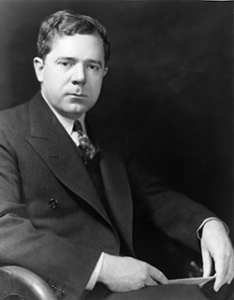 Huey Pierce Long Jr was born in Winnfield Louisiana on August 30th, 1893 and died from gunshot wounds on September 10th 1935.

Arguably the most influential Governor of Louisiana, but also one of the most controversial. There is no denying his vision, and the vast improvements that were implemented under his governorship.
However, some of his methods and ideologies have been called into question.

Coming from a poor middle-class farming family, his education was not remarkable and he started employment as a traveling salesman.
He married in 1913 and after only a year of studying, passed the state bar exam in 1915.
As a lawyer and elected official, he successfully prosecuted and tirelessly campaigned against the large corporations, especially the utility companies, that had taken advantage of easy governance over the years.
He became a people's champion and his radical electioneering methods paved the way for future politicians. He was one of the first to make use of printed leaflets, radio and speaker trucks. He went out and talked to rural communities gaining their support.

He became the 40th Governor of Louisiana in 1928. At this time only around one quarter of the state's population were literate. His free school books program helped to address this. His achievements include the construction of hundreds of miles of new roads, bridges, schools, colleges and hospitals. He placed Louisiana firmly in the 20th century. Many of his programs received fierce opposition from Conservative strongholds such as Shreveport.

He was elected to the US Senate and was able to take his seat in 1932 where, in the midst of the 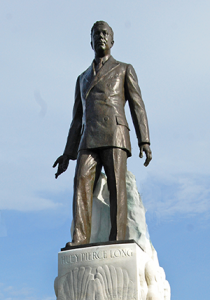 Depression, he supported Franklin D Roosevelt. However, on realizing that Roosevelt had no intention of affirming the wealth distribution program, Long withdrew his support, forcing the President to turn against him with a fierce campaign to discredit Long.

After his term in the Senate, Long returned to Louisiana and continued with his control, despite mounting opposition and intimidation.
His Share Our Wealth Club had over seven million members and his popularity nationwide clearly set him in line for a Presidential nomination. His numerous political opponents regarded him as a dictator, but to many he was a hero.

At 9.20 on September 8th in the Baton Rouge Capital Building, Carl Weis shot Long with a hand gun. Weis was shot 62 times by Long's bodyguards, but Long died two days later. These events are still open to other theories.

Hero or villain, his short life certainly improved the quality of tens of thousands of others.