Of all the early blues artists, Howlin' Wolf's physical presence and often intimidating performances would guarantee him legendary status, equal to that of any of his peers. 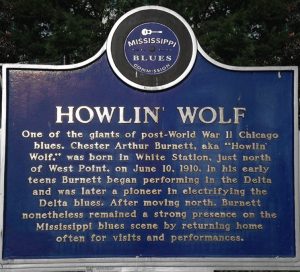 Born, Chester Arthur Burnett in White Station, Mississippi on June 10, 1901, his parents separated a year later and he was forced to leave home, by his mother, at a very early age. After a brief stay with his uncle, he walked 80 miles to live with his father.

In his early thirties, he met with Charlie Patton and learned to play the blues, along with his trademark growl. Burnett's harmonica skills were perfected when Sonny Boy Williamson II married his half-sister and offered lessons. He toured throughout the 1930s and 40's, mainly in the south, meeting and learning from other itinerant musicians such as Robert Johnson and Son House and staying in lodgings such as the Riverside Hotel. 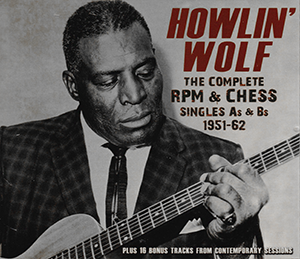 A regular fifteen minute slot on a local radio station brought him to the attention of a wider audience and by 1951, he was recording in Sam Phillips' Memphis studio and signed up to the Chess record label. A year later, the Chess brothers convinced him to move to Chicago. Over the following decade Burnett had several R&B chart hits, including Smokestack Lightning' and Evil, while his reputation for the most amazing live performances grew.
Teaming up with songwriter Willie Dixon, in the early sixties, created more hits such as Red Rooster, Back Door Man and Spoonful. At this time, the blues had been discovered in England and artists such as Eric Clapton, John Mayall and the Rolling Stones were introducing it to the rest of Europe and then taking it back across the Atlantic, reintroducing it to many white areas of the US.

He met Lillian Handley in the late sixties, after a lengthy courtship and living together for six years, they married in 1964. She was the one great love of his life.

By the mid sixties Wolf was recording his own material and at 65 years of age, was still able to offer incredible live shows, driving audiences crazy with his raw blues and feral growling performances. Over the following decade, his health declined, exacerbated by kidney damage from an earlier automobile accident, he required dialysis and regular nursing by his wife, Lillie.

He died after surgery in January 1976, in Chicago, the city that he called home, and that embraced him as one of the pillars of Chicago Blues. The final resting place of the Wolf is in Hillside Cemetery, Hines, Illinois, with Lillie buried beside him.