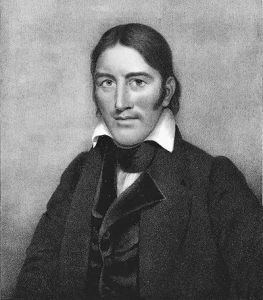 Davy Crockett was born in Greene County, Tennessee on August 17, 1786.
Before the age of ten, he was an efficient rifleman and went on regular hunting trips with his brothers until his initiation in schooling. After only a few days he sufficiently whipped the school bully and was so afraid of punishment and reprisal that at the tender age of thirteen, he headed out on his own into the wilderness. He survived for three years, then returned home to join his family.

He married a few years later and had three children before his first wife died. Marrying again, he fathered two more children.
Crockett became a scout in the Tennessee Militia in 1813, and participated in the Indian Wars and the massacre at Tallushatchee, Alabama, returning home in 1815.

In 1817, he move his family to the newly-formed Lawrence County, entered local politics, and was appointed Justice of the Peace and elected lieutenant colonel of the Tennessee Militia the following year. He was elected to the Tennessee General Assembly in 1821 and lost his home and business to flooding, relocating his family in order to pay debts. 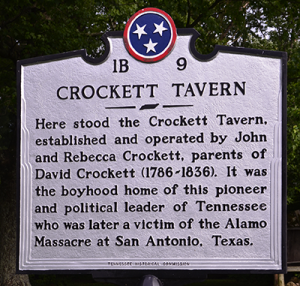 standing alone to oppose the Indian Removal Act, he lost his seat in 1831. He returned to Congress in 1833, only to be defeated again in 1835. Throughout his time in Washington, he supported the poor settlers and opposed any bills pampering to the wealthy elite.

On leaving Congress he promoted his recently published autobiography, A Narrative of the Life of David Crockett. Unable to settle back into local politics, he left his family and headed out to Texas, with three companions, on November 1, 1835.
Dressed in his coonskin hat, buckskins and carrying a rifle he looked every bit, the celebrity that he was. His presence drew crowds and people flocked to see him and listen to his speeches.

At this time, Texas was governed by Mexico, but the majority of citizens were European settlers, who would have preferred to be a part of the fledgling United States.
Crockett and five dozen other men, pledged an oath to the Provisional Government of Texas on January 14, 1836, not realizing that within eight weeks they would give their lives for the cause. With promises of land and financial rewards, they rode to San Antonio in support of the Texans based at the old mission, known as the Alamo. 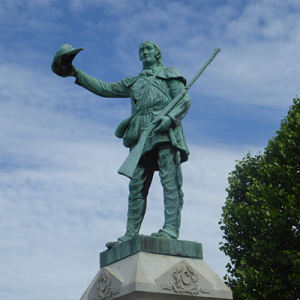 Crockett arrived at the fortified mission on February 8, with about thirty men. Two weeks later, General Santa Anna arrived with several hundred Mexican soldiers, increasing over the weeks to several thousand. Crockett joined Jim Bowie and the Alamo Commander, William Barret Travis.
The thirteen day siege ended on March 6, when the Mexicans stormed the fort and in a battle lasting 90 minutes, all of the defenders were killed.

Their bodies were taken outside of the fort and burned, remaining undisturbed for almost a year.

Davy Crockett lived a remarkable 39 years, with his exploits, steadfast convictions and courage living on, centuries after his death.