Bessie Smith was born on April 15, 1894 in Chattanooga, Tennessee, only to be orphaned before her tenth birthday. Being cared for by her older sister, Bessie would busk, with her younger brother on guitar, in order to survive. 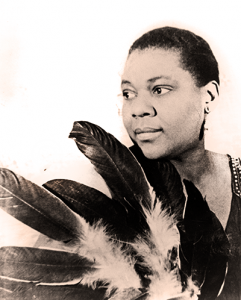 In 1912, Bessie's older brother Clarence, joined the Moses Stokes troupe, a traveling vaudeville and minstrel show run by Lonnie and Cora Fisher. Bessie joined as a dancer and within a year was established as a singer in her own right. Her following developed over the following decade and shortly after her recording debut in 1923 and subsequent tour, was regarded as one of the greatest blues singers of that era. She earned more that most other singers and enjoyed a lifestyle rarely afforded by other black entertainers.Her first marriage to Jack Gee produced a son, Jack Gee Jr, but it fell apart after a few years with evidence of her bisexual nature and affairs by both parties.
She appeared briefly on Broadway and in a movie titled St Louis Blues.In the early 1930's she moved from her established blues to a style more befitting the swing era.

On September 26, Bessie and her lover Richard Morgan were in driving on Highway 61 near Clarksdale, Mississippi when Morgan misjudged a maneuver and the right side of their Packard collided with a truck. Smith had her right arm almost dismembered and was taken to the G.T.Thomas Afro-American Hospital in Clarksdale. She was operated on, but never regained consciousness from possible internal injuries or loss of blood. 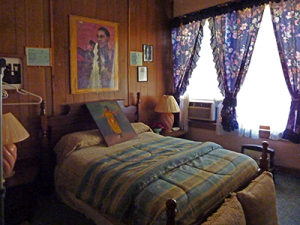 The question of would she have survived if taken to the whites only hospital, is a much disputed subject.
Six years after her death, the hospital, owned by G.T.Thomas was rented by Mrs. Z.L. Ratliff and converted to the Riverside Hotel. This establishment gained fame due to its celebrity blues guests such as Sonny Boy Williamson II, Ike Turner, Robert Nighthawk,and Muddy Waters.

The room in which Bessie died, is now a guest room, dedicated to her memory.