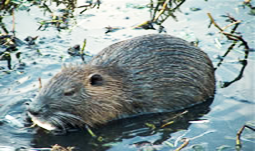 Before the European invasion, the forests, swamps, parries and marshes of Louisiana supported an abundance of wildlife. The red wolf, bison, Louisiana black bear, cougar, jaguar and Florida panther once roamed freely. But now, of these, only the black bear remains.

There are numerous species of mice and rats and the white tailed deer is not an uncommon sight.

The invasion of nutria from South America has caused a major loss of vegetation along the coastal wetlands. A control program was initiated in 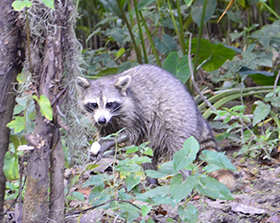 1998 and has been relatively successful in reducing the destruction.
The nutria feed on the vegetation, stripping entire areas, which are unable to grow back before the tidal waters move in. The root systems die and the soils is washed away adding to the sinking coastline.

Sharing the swamps you might also find feral pigs, possibly dating back to the domestic pigs released by the first French and Spanish explorers centuries ago.

Both gray and red fox and coyote are among the remaining carnivores, along with the bobcat.

Spanish moss offers a favorite roosting place with at least two of the many species of bats to be found.

Native tribes in the region made good use of rabbit fur and deer skin for clothing. 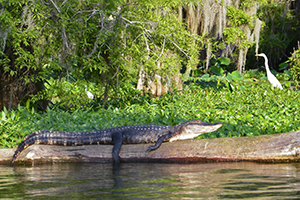 Snakes get bad PR, which undoubtedly aids the survival of these generally shy creatures.
Of the 54 varieties in Louisiana, there are only seven to avoid. These are: copperhead, cottonmouth, eastern diamondback rattlesnake, canebreak rattlesnake, pygmy rattlesnake, Texas coral snake and the harlequin coral snake.
All snakes are carnivorous predators, feeding on live prey such as rodents, insects and various small mammals and amphibians. They are, in turn, prey to hawks, owls and many larger animals. Common harmless snakes include the corn snake, speckled king snake, rat snake, diamond-back water-snake, racers, rainbow snake, Midwest worm snake, crawfish snake and pine wood snake.

Frogs, toads and lizards are not so shy with the green anole lizard being a very common site. The 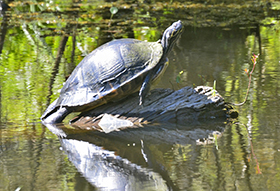 larger brown anole is increasing its territory, having been introduced at the end of the last century. The two species are able to co-exist, as are the common snapping turtle and alligator snapping turtle. Other turtles include the mud turtle, western chicken turtle, southern painted turtle, ringed map turtle and ornate box turtle.

Salamanders and bullfrogs are returning from near extinction.
It's a similar story for the the American alligator, hunted until they were almost an endangered species, but due to changes in hunting laws, they are now a common sight in many of the lakes and rivers.
There is hardly a tour boat in Louisiana that cannot boast views of alligators, with many having regulars, appearing on cue. It's surprising to see what these powerful creatures will do for a marshmallow candy. 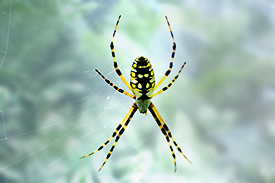 With its hot, wet climate, Louisiana is host to an amazing bug population.

From cute to annoying and some which are potentially deadly.

Don't be fooled by appearance, the inconspicuous brown recluse spider with its flesh-rotting sting is certainly more of a threat than the striking black and yellow garden spider.

Interesting and exotic names such as the candy striped leaf hopper, often convey an image of what you will see. 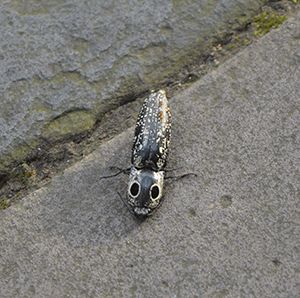 The sound of cicadas is integral with the landscape, some species in this area live underground and only emerge every 13 years when, the temperature reaches 65F. They enjoy a brief mating period before their general demise.

Bugs feed on fruit and vegetation, smaller insects or by sucking the blood of larger animals and humans.
Bugs also kill and eat other bugs such as the spider wasp, a wasp which will attack and devour jumping spiders. The sowbug killer spider, as its name suggests, devours sowbugs (aka wood louse, roly poly, pill bug). The masked hunter will help with housekeeping by devouring bedbugs, but it will also give unsuspecting humans a nasty bite

Some insects that we might never see, such as the southern pine beetle, pales weevil, pitch-eating weevil and the baldcypress leafroller are capable of destroying trees and plants, thus defacing large areas of the landscape. 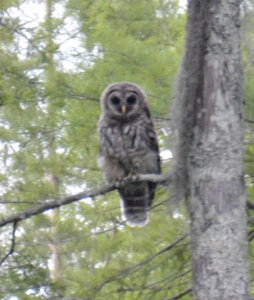 Louisiana plays host to millions of birds each Spring as they migrate north, from South and Central America, Mexico and the West Indies. Many of these birds arrive close to death after a grueling flights covering thousands miles. For some it's only a short 500 mile hop from Mexico, while others will travel from as far away as southern Brazil.

The pelican state can boast to having some of America's tallest birds, such as the great egret and great blue heron, which are commonplace, as are many larger raptor species such as vultures, hawks, kites, owls and eagles. Commonly seen are barred owl, red shouldered hawk and osprey.

Around many of the rivers and lakes you will find various species of duck, goose, teal, merganser, grebe, storm-petrel, boobies, gannets, cormorants, anhingas, heron, ibis and spoonbill.

Look out for kingfishers, nighthawks, hummingbirds and hundreds of different songbirds.

The coastal waterways and marshes are ideal for plover, sandpiper, stilt, godwit, woodcock, gull and tern.

There are many excellent birding sites throughout the state, depending on what you are looking for. 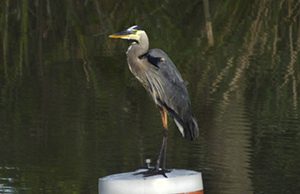 The state bird, the brown pelican, can be found along the coast. These ungainly birds were almost wiped out back in the mid 20th century by the pesticide DDT. It caused the birds to lay eggs with thin shells, not too much of a problem, but as pelicans incubate the eggs by standing on them, this had catastrophic results.

There are several collective nouns for a group of pelicans, such as: scoop, pod, brief, pouch and, most appropriate, squadron.

The state's reputation for seafood is unsurpassed with Breaux Bridge regarded as the crawfish capital of the world and Louisiana's Shrimp and Oyster production being greater than in any other American state. Fishing is an important industry and also a very serious pastime, with residents and visitors out every day enjoying one of the world's most popular sports.

The shoreline of Louisiana in on the 9th largest area of water in the world, the Gulf of Mexico.
This ocean houses an enormous volume of fish and sea-life.
The saltwater fish found here would include black drum, red drum, sea trout, Spanish mackerel, fantail mullet and jack crevalle.
The offshore platforms (2,000 to 5,000 feet deep) shelter some of the more elusive inhabitants such as cobier, marlin, snapper, dolphin fish (mahi mahi), grouper and redfish. Large yellow fin tuna can weigh in between 40 and 140 lbs making them a prized sports trophy, along with the fast-moving wahoo.

At least four dozen species of shark live in the Gulf waters including tiger shark, lemon shark and hammerhead shark.

Stingray, are more common than people think, along with jellyfish including stinging varieties, and several species of octopus and squid.

Apart from the devastation to marine life caused by hurricanes and oil spills there is another natural hazard, which leaves thousands of dead fish and sea mammals on the gulf beaches of Florida. The scientific term is harmful algae blooms (HAB), but the locals refer to it as red tide, due to the coloration of the ocean. Blamed on fertilizer run off from the Mississippi and Everglades, naturally occurring algae emit toxins which are deadly to birds and marine life. This is an annual occurrence, with varying degrees of severity. It has not yet reached Louisiana.

The coast is also host to an unpleasant, free-floating sargassum weed.